The education system in America has become the enemy of students. 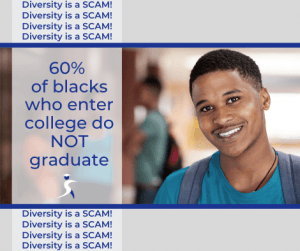 A group called the National Association of Independent Schools brings the social justice agenda to private schools. And by making an example of them, we believe we can get public schools to reconsider their positions as well. Consider the amount of money that goes into education, and you understand the ruse of the social justice agenda—a mere money-grab from hardworking American parents.

In no other country is diversity or multiculturalization discussed to the level it is in the United States. America is the most diverse country in the world in all aspects, yet the social justice agenda forces multiculturism at every turn. Diversity is what makes America great. But to focus on diversity for diversity’s sake is ridiculous. Examine ‘Ethnic Fractionalization” around the world. Of 159 countries, America ranks 85. How can we rank so well in ethnic fractionalization, yet have so many calls for multiculturalism and diversity?revailing attitude of American citizens.

Of the top 10 least racially diverse countries, ask yourself if diversity is a top agenda item with their populations? These countries aren’t looking to change the demographic makeup of their countries to suit some geopolitical agenda. They focus instead on survival. The success of America and our wealth allows America to lead the world in promotion of the social justice agenda. Because we have far too many people with too much time on their hands fighting “created” problems. The United States ranks high in diversity because we are amazingly diverse. America offers everybody equal opportunity, not equal outcomes. It’s far past time to make this message the prevailing attitude of American citizens.