In his farewell address, a former Counsel of the NEA boasted that the organization is as strong and powerful as they are thanks to the millions of TEACHERS who PAY their dues.

Notice, the NEA proudly proclaims how they get their power: Through the millions of people collectively donating millions of dollars to their organization. More than 3 million teachers in fact – every year.

And what has this “powerful” organization successfully done to better education? Considering their track record over the past couple years, it’s clear their agenda is political advocacy rather than real educational improvement.

The NEA’s recently passed amendments make it clear that teacher dues will be used to advocate for abortion, reparations, “white fragility” trainings/staff development, LGBTQIA and racial justice and dues be will used against any form of school choice outside of public education.

Take for example the #RedforEd “grassroots” movement that is sweeping the nation.

Its stated goals–higher teacher pay and better education are overshadowed by a more political agenda: a leftist uprising designed to flip purple and red states to blue using the might of unionized activist teachers as its lever. Arizona, West Virginia, Kentucky, North Carolina, Colorado…now Indiana!

Can you legitimately claim to be a “grassroots” movement when you are backed by and coordinated by the NEA?

Why We Are Red for Ed

Consider the recent 2019 governor race in Kentucky as evidence.

“Incumbent Gov. Bevin’s handling of a series of unauthorized teacher’s strikes organized by the local Kentucky #RedforEd teachers group this past spring created great anger among many of the state’s teachers, and they vowed to defeat him in November. During the election the #RedforEd teacher’s movement flexed its political muscle in the Kentucky gubernatorial race, by powering the campaign of Democrat Attorney General Andy Beshear to victory against incumbent Republican Gov. Matt Bevin.”

Next, consider the recent teachers strike in Chicago and add them to the #RedforEd nationally coordinated movement.

A woman by the name of Rebecca Garelli, a former CTU (Chicago Teachers Union) member who moved to Arizona to help organize the #RedforEd movement that launched there in March 2018 tweeted her solidarity with teachers in the “Windy City”.

But you know what the unions didn’t decide to protest about? The decreasing quality of education for its students. 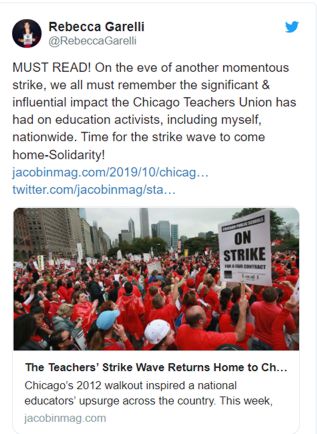 So, as the union’s activist teachers strike for higher pay, smaller class room sizes and other personal issues, we SEE the quality of our student’s education continues to drop as the teacher’s unions boldly and proudly admit their political intentions and agendas.

Moreover, as recent as November 2019 the NEA funded #RedForEd movement took its iron fist to the state of Indiana. The teachers strike consisted of thousands of teachers leaving 300 schools closed and kids at home.

Thousands of teachers wearing red have surrounded the Indiana Statehouse for a rally calling for further increasing teacher pay in the biggest such protest in the state amid a wave of educator activism across the country.

Teacher unions says about half of Indiana’s nearly 300 school districts are closed while their teachers attend Tuesday’s rally and legislators gather for 2020 session organization meetings.

And lastly, in the recent fall issue of the quarterly journal, the American Educator from the second largest teachers union, the American Federation of Teachers’ (AFT) , their theme is, “Confronting Bias in Schools: Classroom Conversations on Race, Ethnicity, and Identity,” and includes calls for incorporating leftist ideologies into the classroom.

Do you SEE the scam yet?

Now, in exposing all of this, SEE would like to make it very clear we are not against bettering America’s schools for the benefit of the parents, teachers, and students. SEE takes no issue with paying teachers more for the hard work they do in educating America’s youth. However, with the MILLIONS poured into Americas education system and with the continuing downward spiral of test results in academics the question must be raised, where is the disconnect? Where is the money spent going if its not reaching the teachers, better schools, better curriculum etc.? And futhermore, if this “grassroots” movement of teachers is really about bettering schools, why the blatant leftist agenda being pushed under the guise of better “education?”

The NEA and teachers unions have gone unchallenged…UNTIL NOW!

Please consider joining SEE in our mission to hold the
NEA and unions alike accountable for their actions.